J.M. Thompson, general contractors in NC, has been in business for over one hundred years and has remained a family business since its conception in 1921.  It is being led by the third generation of Thompson brothers who are building up the fourth generation to grow and expand the business in the years to come.  The company has a deep, storied past as it has grown and changed over the last century.  Many know the story of John Marvin Thompson and how he got the idea for the company, but many people do not know the story of Hal and his legacy in the company.

Transported to the Past

If you walk into Marty Thompson’s office, you are immediately transported to a bygone era.  It’s not just the black and white photos displayed on his bookcases, or the woodworked relics that line his desk, it is his artful way of telling stories.  At any given moment, Marty has the ability to tell a story, long since forgotten by many, but cherished by him.  His memory has a deep recall and he can relate stories from years past as if they occurred yesterday.  Some will make you laugh, others make you cry, while others inspire to strive after bigger dreams.

This gift that Marty possesses is hereditary and was passed down from his father.  Hal Thompson, former president of J.M. Thompson, was an artful story-teller.  Marty relayed, “Back in the 90s, I bought my father a journal for Christmas.  I told him he could write anything he wanted in there, but he had to share his stories.  He filled up the journal and I have all his stories written in his own handwriting.”  With that, he dug out an old journal, yellowed with age, which contained Hal Thompson’s memoir written in his own hand.  In it contained stories of jobsites, the business, and his many inventions.

Hal’s History and the Growth of J.M. Thompson

Hal Thompson was born in Boylan Heights, North Carolina in 1924.  His father, John Marvin Thompson, had started a residential construction company just five years prior.  There wasn’t a moment in Hal’s life where he wasn’t around the construction industry.  He grew up under his father’s instruction and learned the skills of the trade at a young age.

John Marvin Thompson was a skilled craftsman, with an eye for detail, and a creative mind.  He was an amateur inventor and would plan and piece together his own inventions to make more efficient systems.  Hal picked up his father’s hobby and began to see everything with the mind of a mechanical engineer.  He thrived on understanding how things worked and how to make them better.  Whatever system or invention he could create to save time and money, he tried his hand at.  Most often, the inventions worked well and caught the attention of those who worked closely with him.

When Hal was in high school, he was assisting his father on one of J.M. Thompson’s first commercial projects: Camp Butner in Butner, North Carolina.  It was at the beginning of World War II and military bases were cropping up all over the United States in preparation for combat.  One of the project’s features that fell under Hal’s careful eye was laying the sidewalks within the camp.  Back in those days, a concrete mixer would only hold two yards worth of concrete and it would have to be shoveled into a wheelbarrow and then wheeled to the spot where it was to be laid.  Hal, seeing this as a grueling task that slowed production in between pours, rigged up a system that would move the concrete more efficiently.  He created a liner in the bed of an old pickup truck with a chute at the rear.  He then built a frame behind the cab with a winch on it.  The winch would pick up the back end of the liner and when lifted would drop the concrete through the chute into the formed sidewalk.  This sped up the process and saved labor.

Hal’s ingenuity caught the eye of a colonel at Camp Butner who wrote him a letter of recommendation for the Air Corp where he trained to work on B 17 bombers and eventually became a pilot.  Although he never saw any action overseas, Hal’s time in the Air Corp strengthened his knowledge on equipment, mechanics, and the virtue of hard work.

After the War, Hal went back to work for his father in residential construction.  In his memoir, Hal writes that he grew tired of the people who wanted custom built houses.  “They always wanted to build more than they could afford,” Hal wrote in his journal.  Eventually, he was able to convince his father to move the business more into commercial construction.  By the time he took over the business himself at the age of 28, they were well on their way to being fully commercial.

The Victories of Hal’s Career

“If I had to describe my dad in a few words, I’d say that he was strong in his faith, honest, and generous and helpful to the people around him.”  Marty reflected.  Those characteristics served Hal well over the years he ran J.M. Thompson.

One of Hal’s crowning moments within the company was his partnership with Mr. Grimble, Facilities Director of Winn Dixie.  Hal won the company a job building a large distribution warehouse in Charlotte, North Carolina by personally flying down to the Winn Dixie Headquarters in Florida.  Because he placed the proposal directly into Mr. Grimble’s hands, Mr. Grimble felt compelled to give J.M. Thompson the project.  After developing such a positive relationship with Mr. Grimble, Winn Dixie used J.M. Thompson’s services for many of their projects across North Carolina.  Hal and Mr. Grimble became life-long friends attending the NC State and Clemson games together each year and spending time at Mr. Grimble’s home in Florida.  Because of these successful Winn Dixie projects, J.M. Thompson grew in its commercial construction capacity.

Another remarkable achievement of Hal Thompson was hiring and training the first African American Superintendent in Raleigh, NC.  Rudolph Adams possessed a will to learn and gain knowledge about construction, and Hal, seeing his potential, began to train him to be a jobsite Superintendent.  When many during this time still discriminated against people of color, Hal stood in the gap and rallied behind African American workers.  J.M. Thompson was an equal opportunity workforce then as it is today.

“I thought the world of my dad.” Marty stated.  Marty reflected when he was a little boy that he would spend hours watching his father woodwork in his shed out in the backyard of their house.  Once it got late, Hal would invite him to jump on his back and he’d carry Marty back to the house.

As he got older, Marty always tagged along with Hal to different jobsites where ongoing projects were being constructed or to review potential sites for upcoming projects.  “I remember traveling out to the site of Camp Oak Hill with my dad on a rainy Sunday afternoon.  My father loved that place and the mission it stood for,” Marty said.  Hel co-founded the camp and it still maintains its mission to uplift Christian youth.

Just as construction was a large part of Hal’s childhood, the same was true for John, Dickie, and Marty.  All three boys learned their way around a jobsite at an early age.  “Working in the field was one of the best gifts my dad ever gave John, Dickie, and I.  We got to learn how things worked for ourselves.”  Marty stated.  Hal often told his sons, “If you don’t like solving problems, don’t get into this business.”  Just as their father had found solutions to problems whether out on the jobsite or within the business, John, Dickie, and Marty have solved problems and grown the business to what it is today over the last thirty years.

It is because of Hal’s influence that J.M. Thompson developed the three pillars of their mission statement, a family-run business built on integrity, hard work, and family values.  Hal’s legacy not only lives on in the Thompsons who still diligently run the company, it lives on in the spirit of each and every employee.  The grit, creativity, and perseverance found in Hal Thompson remains a driving force at J.M. Thompson. 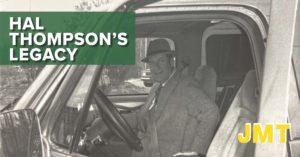